Trying to convey the evolution in radio drama that took place while Yours Truly, Johnny Dollar was on the air is a tricky proposition. I'm not sure this segment is quite there yet, but I hope you'll enjoy it nonetheless.

Posted by Unknown at 8:16 PM No comments:

Yours Truly, Johnny Dollar's Christmas episodes tended to have a more frivolous tone. Perhaps because it isn't overtly a Christmas story, The Rasmussen Matter is something of an exception. In any case it's one of my favorites this time of year. I've posted about it before, and if you've never heard it, you should be able to find it here. Enjoy.
Posted by Unknown at 11:55 AM No comments:

With the possible exception of Jack Johnstone, Bob Bailey is the single most important figure in this history of Yours Truly, Johnny Dollar, so it;s not surprising that the longest segment yet is the one about him. This is quite rough, to be sure, but still tells an interesting story.

When I heard that Ed Walker had been diagnosed with cancer and was stepping down from hosting The Big Broadcast, I sent him an email to wish him well. What I hadn't realized is that he was almost certainly hospitalized at the time and very likely didn't get the note. I suspect quite a few other people would have liked to wish him well before his passing yesterday. It's both fitting and sad that he died just a few hours after the airing of his final show, recorded from the hospital. I'm sure people who knew him better will have much more eloquent summations of Ed and his legacy than I could offer, but it occurs to me that during his life he made an awful lot of people happy and that's no small thing.  That final show is currently available to stream via the Big Broadcast's page on WAMU's site, and it seems fitting that the best tribute to Ed Walker ultimately comes from the man himself.
Posted by Unknown at 1:41 PM No comments:

Veteran broadcaster and host of WAMU-FM's long-running old-time radio showcase The Big Broadcast was the second interview I shot for this project. I'll always be grateful to Walker not just for the time he gave me in 2013 but also the many years he hosted The Big Broadcast. Earlier this week, it was announced that Walker would be stepping down as the host of The Big Broadcast to focus on some health concerns. Needless to say, I wish him and his family all the best. During the interview, Walker also talked about his life and career in broadcasting. In this clip, he discusses the waning days of radio's golden age.

Posted by Unknown at 5:56 AM No comments:

The Many Voices Matter

If you ever have trouble remembering the names of all the actors who played Johnny Dollar, this will help you. I still need to add some cutaway images, but overall not too shabby.

Among the cool moments from my conversation with broadcaster Dick Bertel a couple weeks back was this reminiscence of Yours Truly, Johnny Dollar and the particular connection he felt with the show.

Posted by Unknown at 5:14 AM No comments:

A Matter of Gratitude

Many thanks to veteran broadcaster Dick Bertel for taking the time to sit down for an interview. In addition to his first-hand account of the waning days of radio in the 50s and 60s, Dick had great stories about his long career in radio including his encounter with the legendary Vincent Price (who guest-starred as himself in an episode of a Yours Truly, Johnny Dollar). 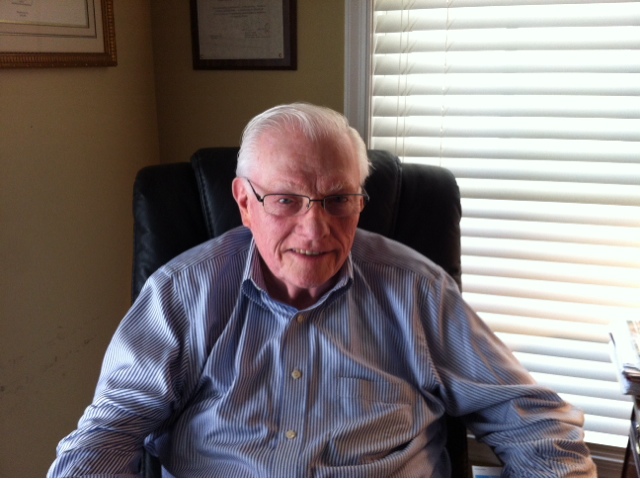 Posted by Unknown at 5:56 PM No comments:

The Next Interview Matter

I just printed out my list of questions for Tuesday's interview with veteran broadcaster Dick Bertel. As one of the hosts of Golden Age of Radio in the 1970s, Bertel was instrumental in giving many of radio's finest actors, writers and producers a showcase to tell their own stories about the period. The shows are available online and are an invaluable resource for fans of radio drama.
Posted by Unknown at 6:31 PM No comments:

In some ways, I've tried to approach this documentary the way the show's title character would approach a case. In general, this meant far less punching, shooting of a different sort and a budget lower than some of Johnny's expense accounts. One bit of detective work I'm very happy with was a 1970s radio interview with Mandel Kramer - recorded for a radio station in Hartford of all places - in which he gives a concise summary of Yours Truly, Johnny Dollar. Using this as the first "expense account item" might seem a bit obvious, but obvious isn't necessarily the enemy of right and proper. You be the judge.

Posted by Unknown at 5:56 AM No comments:

The By Any Other Name Matter

Before Johnny Dollar, there was Lloyd London. Even if Dick Powell had continued in the title role beyond the first audition show, I'm not sure that "Yours Truly, Lloyd London" would have gained the same purchase in radio fans' hearts. 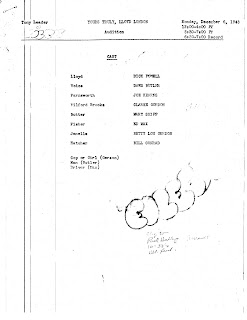 Posted by Unknown at 5:17 AM No comments:

Yesterday my son asked me what spurred me to start this project. The effort to come up with a relatively concise answer reminded me that my motivation has definitely shifted over the past couple years. Initially, it was almost a lark, a project to prove to myself that I hadn't forgotten everything I learned in film school, using a topic I loved as a means to an end. As I pursued both interviews and research,  though, one thing did strike me. Perhaps the most fascinating thing about Yours Truly, Johnny Dollar is that the circumstances that led to it being such a smart, character-driven show - particularly during Bob Bailey's tenure - are the same ones that ensured its ultimate end.

During the decade-long shift from television to radio, the sponsors who dictated the content of the network airwaves as much as - if not more so than - network executives were paying much more attention to the new medium. This intersection of the sponsors' benign neglect and an overall more sophisticated listening audience created a window of relative creative freedom for radio. Through  this opening came such talented writers and producers as Jack Johnstone, Ernest Kinoy and Norman Macdonnell (to name just a few), for which I am hugely grateful. As much as I love The Shadow and I Love a Mystery, shows like X-Minus One, Frontier Gentleman and Yours Truly, Johnny Dollar are the ones that have stuck with me the most.

Working in the television business at a time where another new technology in the form of online delivery is changing both form and content, it's not hard to see similar patterns playing out. The principle of "least objectionable programming" has long dominated mass media, especially in the United States, and many smart people in the TV industry insist that this dominance is now over. However, it's worth remembering that even the smartest people in the business are lucky to be right more often than they're wrong. It's tempting to believe that quality will win out, and in the long run it often does. At any given moment, though, this is far from certain.

Posted by Unknown at 8:12 AM No comments:

Email ThisBlogThis!Share to TwitterShare to FacebookShare to Pinterest
Labels: Gunsmoke, X Minus One, Yours Truly Johnny Dollar

With all the work that went into the introductory piece posted the other day, it's hard to believe that I now don't want to start the movie that way. On the plus side, it's still a nice trailer.
Posted by Unknown at 8:54 AM No comments:

Email ThisBlogThis!Share to TwitterShare to FacebookShare to Pinterest
Labels: Yours Truly Johnny Dollar

The Game of Inches Matter

They say that football is a game of inches. The same can be said of editing a movie. This introduction isn't much longer than the previous version but nonetheless manages to include significantly more material than its predecessor.

As I alluded to in my post from a few days ago, I've been working in earnest on editing. With that in mind, I'm happy to offer this (still slightly rough) introductory sequence.

Posted by Unknown at 1:46 PM No comments:

The What About the Movie Matter

Some say that editing is where a film is really "written". I've always thought this is especially true for a documentary where the story you're telling doesn't have the same kind of road map a drama or comedy generally does. Satisfaction and frustration frequently walk hand in hand where editing is concerned. Is it worth it? I'll let you weigh in when I post the fairly lengthy sequence I've been working on. Good night.
Posted by Unknown at 7:57 PM No comments: